In this guide we are going to take a look at how to create workers for any service that is available, be it a default service like the OBD manager or a custom one that you've made for yourselves. First off we're going to explore what can workers be used for and later on in the guide we're going to go through creating an example worker that is going to fetch OBD data and save that data to a file. Let's get started! 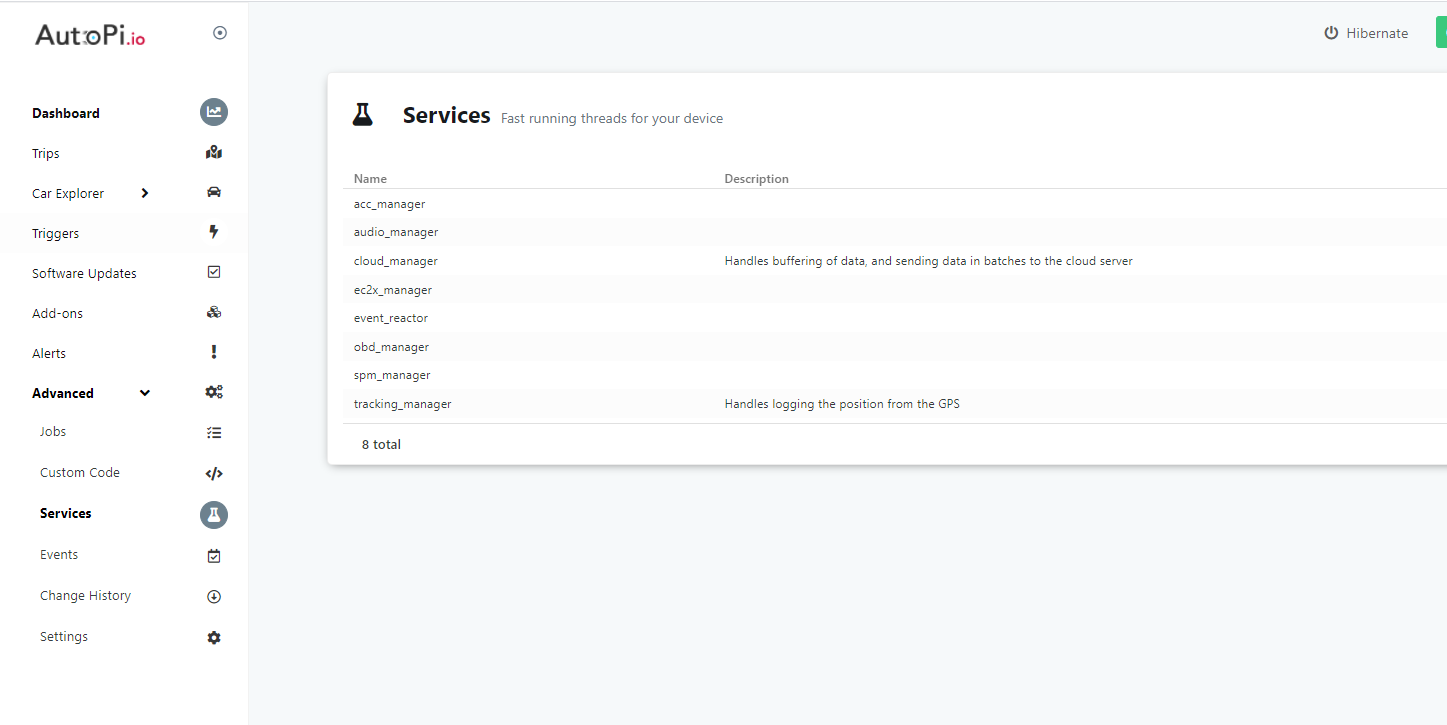 First off, you'll need to decide which manager to use. That really depends on the use case you have. For example, if you would like to read OBD data, the obd_manager would make the most sense. If on the other hand you would like to execute some AT command that isn't implemented by default, the ec2x_manager is the one you'd be looking at.

For the purposes of this guide, we will create a worker inside the obd_manager that will be fetching some data. We will navigate to the services page (Advanced > Services) and select the obd_manager entry on the screen.

The new page that opens up is the home page for the obd_manager where all of its workers reside. We will create a new worker now. Click on the '+ Create' button to open up the creation window.

You'll be presented with the following window: 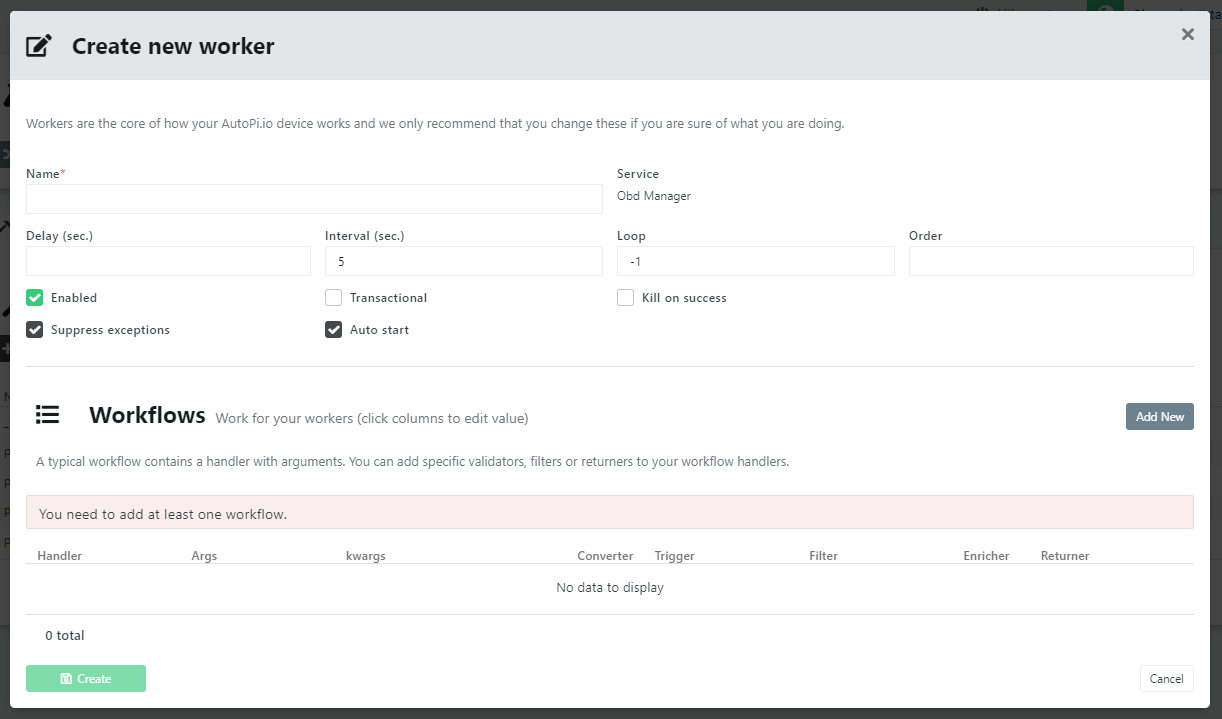 Let's now get familiar with the interface. There are a few fields that need filling out and then we will move on to the workflows:

Now that we've gone through the basic options, let's take a look at the possibilities for workflows. Creating a workflow adds a new row on the table below. This is the basic representation of a workflow. The columns in the table are as follows:

All of the above (except for args and kwargs) are also called hooks. We will look into them in the next section.

Different services have different defaults handlers. The best place to take a look at those handlers is the services page. Since the idea we're going for in this guide is to invoke continuous OBD query commands, we're going to be using the query handler.

The arguments (args) and key-word arguments (kwargs) are specified in JSON format (this means double quotes instead of single quotes, it took me a while to figure that out the other day). We want to read out the fuel level every 10 seconds and record that data, so we will specify the following arguments:

The key-word arguments aren't essential for the worker to work, however they give more control over how it'll operate, so we'll specify the following kwargs:

Now we've got the first part of a workflow going. From here on out, everything else is optional depending on your needs. Most of you would want to have some way of saving the data however, for which you can use a returner. You can view a guide about that here. Here's the final result: 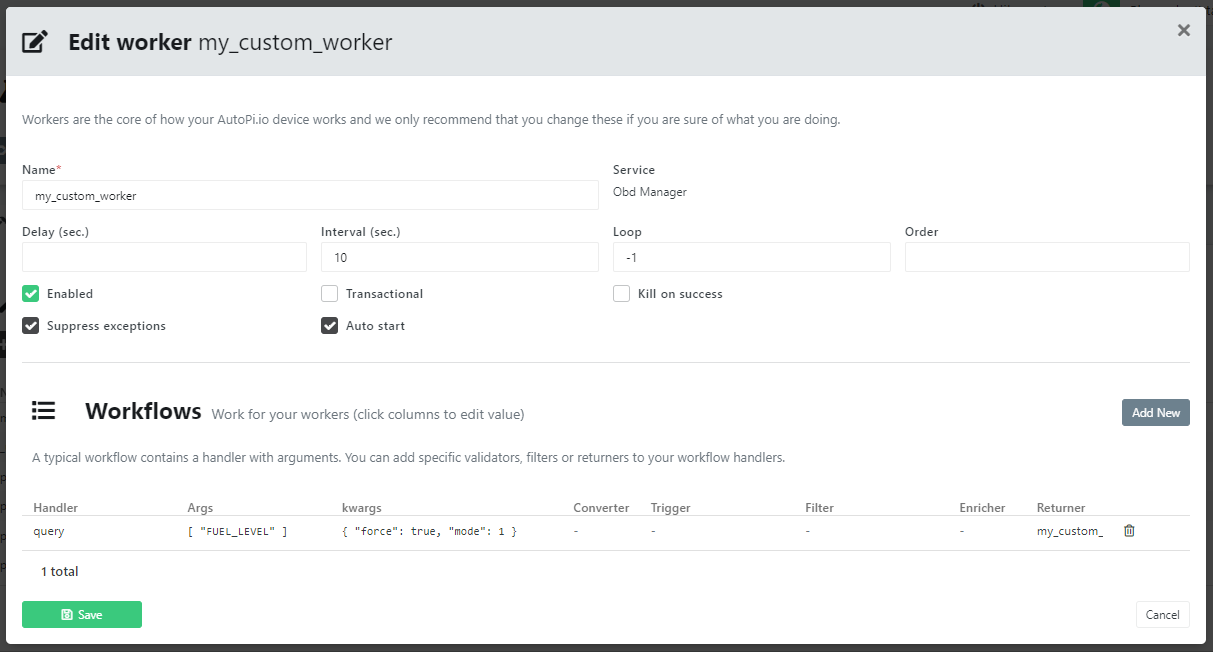 The last thing you need to do is to hit Save and let the device sync up with the new changes. After a service restart, the device should be executing your new service worker.

You can create your own custom hooks by creating a new custom module (Advanced > Custom Code) with an execution type, but you have to register them to each individual service through the Hooks tab. Each hook needs to have this specific signature:

The important part is that the function receives some result and returns some value. Based on the output of each hook the workflow might be interrupted. If falsy values are returned at a specific point in the workflow, the rest of the workflow will stop. This isn't the case with triggers - they will always execute, as the logic there might be very valuable to be executed even if there is an interruption. Even in the case of a thrown exception the trigger will still execute.

You can use the following command to grep for the specific service:

As a closer - workers are extremely powerful if used correctly. They can execute continuously or a set amount of times. Workflows within the worker can be set up so that the desired outcome is reached without having to write complicated custom code. Use them to your advantage whenever you want to communicate something with the hardware components of the AutoPi or with your car directly.

If you'd like to discuss this topic with us or other fellow community members, you can do so on our community page dedicated for this guide: Create Service Workers.

You can also write us an email on support@autopi.io. We usually respond back in 24 hours on working days.