As explained in the introduction, PIDs are used to request and receive data from the vehicle. It can be real-time data, such as RPM, Speed, Fuel Level and so on, but it can also be in the form of Diagnostic Trouble Codes (DTCs) and other troubleshooting data useful to vehicle technicians.

In this guide, we will take a deeper look at how PIDs are structured and will also create a custom PID Logger for our AutoPi device.

Let's take a deeper look at the PID request that was presented in the introduction.

Let's start with the general structure of the message. Firstly, we have the header (7DF). The header is a CAN identifier which defines who is sending the message and if it is a request or a response. In this case, 7DF is the header used by external test equipment to make requests towards ECUs in the vehicle. The hashtag symbol (#) simply separates the header from the body of the request.

The rest of the body isn't going to be read by the ECU, so it is left empty.

The response from the ECU will look very similar with a few differences:

In this case the header is 7E8 which is the header used when ECUs send responses towards external test equipments (i.e. requests made with the 7DF header). Again, the header is separated from the body with a hash sign and the first byte of the body defines the length of the data.

However, the second byte changes a bit - it is the same as the query's second byte, except that 0x40 is added to the value. The value after that is identical to the code sent with the request (0C for RPM), while the rest of the body is the actual value returned. Usually, all you need to do is to transform the hexadecimal value to a decimal value, but that's not always the case. Sometimes there's extra calculations that need to be done in order to get the value, for example in this case - the total value needs to be divided by 4, making the result:

You can send a PID request on the CAN bus manually using one of two commands: obd.send or obd.query. Here are examples of how to use both of them to send the aforementioned PID.

The obd.query command is relatively simple - you need to provide some arbitrary name for the PID (MY_RPM). The header argument is the header of the PID. mode is the diagnostic service that's being queried and the pid argument is the exact value you want to query. If you compare the command to what was presented above, you will find many of the bytes are overlapping.

The obd.send command does exactly the same, but in a different format. You must specify the full PID to be sent in a string. Note that the length of the body is omitted. If the auto_format argument is set to True it will automatically calculate the length byte and prepend it to the body. You can also skip this argument and add the length byte and empty bytes yourself. The expect_response argument will make sure that you receive a response back from the vehicle, if one was provided. If you skip adding the expect_response argument, you will only send the PID on the CAN bus.

Let's now create a PID Logger for your vehicle. Firstly, we will create the PID itself, so that it is present in your Library. Next, we will use the PID from the Library to create a PID for your AutoPi device.

Let's create the RPM PID that we've examined in the previous section. Firstly, we will need to open the Car Explorer > Library > My Library page. On that page, you will see a '+ Create' button. One of the options should be PID - select that one. The following pop-out window should show up: 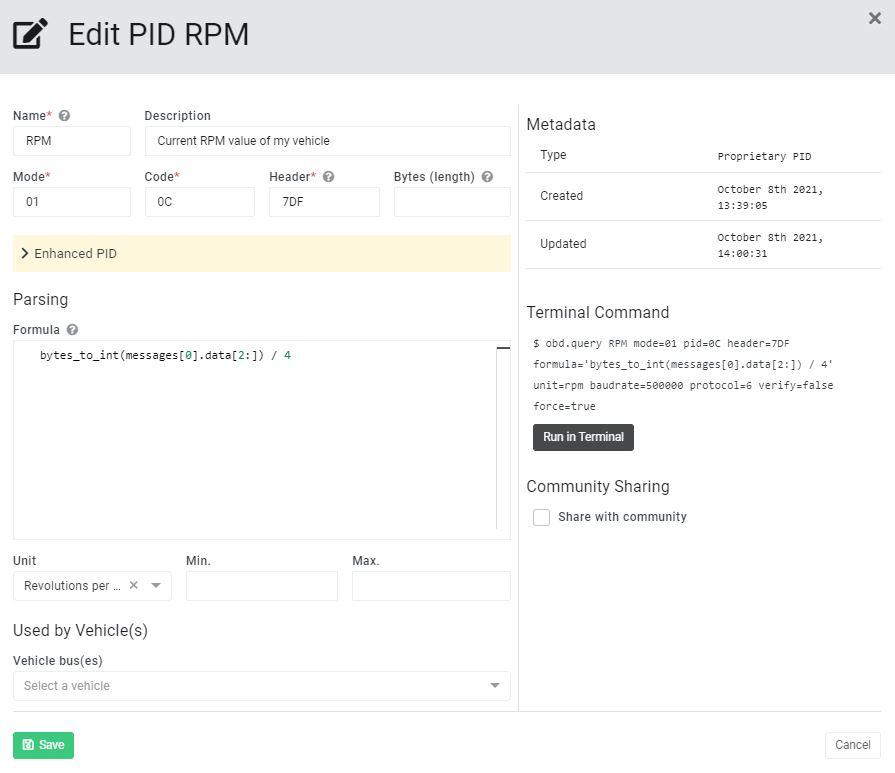 Let's go through the different fields that are available in this view:

Name: This is an arbitrary name you can give to your PID. This name will be used to create data points for this PID logger, hence will be the name you use to create widgets on your Dashboard.

Description: Some description for your own readability.

Mode and Code: The mode (diagnostic service) and code together form the PID.

Header: This defines the header of the PID.

Bytes: This defines the expected length of the PID response.

Enhanced PID: This menu allows you to set some more specific details about how the PID should be sent on the CAN bus and how the response should be found. However, this guide only covers the basic OBD-II PID communication, so we will take a look at this dropdown in another guide.

Formula: This is where any parsing formulas can be inputted. Any valid python code can be written in this field and will be evaluated during the execution of a PID Logger.

Unit: You can specify the measurement units in this field.

Min and Max: These two fields define what are the minimum and maximum values that this PID can produce.

Vehicle bus(es): In this dropdown menu, you are able to select the CAN busses on which this PID is valid.

What means for a PID to be valid in this case? It means that if this PID was sent on the CAN bus of a vehicle, the vehicle would recognize it and return a valid response. So now the question is, how can we test the PID? On the right hand side of the window, there is a "Run in Terminal" button which allows you to run the PID if your device is online and plugged into your vehicle. Remember to have your engine running while you execute the command.

Once you've confirmed that the PID returns valid data that you can use, you can click the Save button and move on to the next section.

Now that we have a PID registered in our library, we can finally add a logger to our device which will report data. Remember that in order to be able to register a PID as a logger on the device, the device's vehicle bus needs to be added to the PID (look at vehicle busses in the last section).

If you're using your AutoPi with an internal combustion engine vehicle, you should see some default loggers setup for you already.

Open up the Car Explorer > Loggers page. You will see a page with a '+ Create' button on the right-hand side. Click on that button and select the PID option. A new window should show up that looks like the following screenshot: 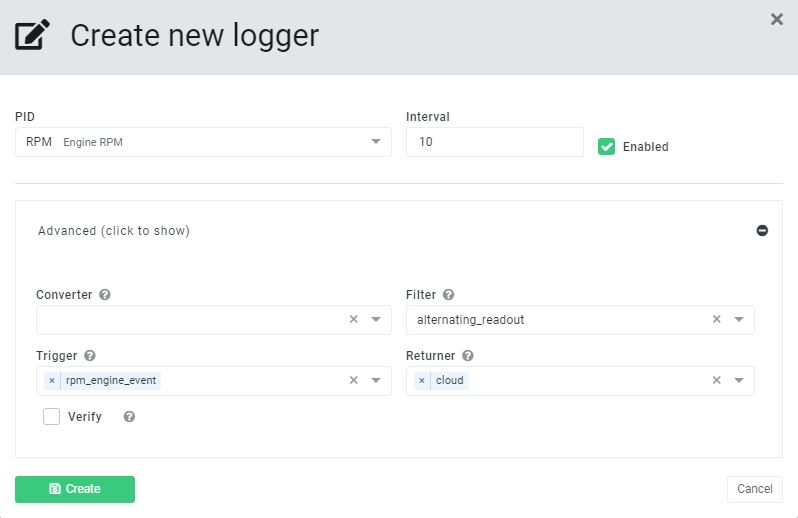 Let's look through the fields available:

PID: This is the PID that you would like to use. Select it from the dropdown menu. If the PID you want to assign doesn't appear in the list, remember that you need to add your vehicle's bus to the supported vehicle busses when editing the PID itself.

Interval: How often should the PID be queried (in seconds)?

Advanced: If you are familiar with AutoPi services, you might recognize these options - the advanced options are going to be set on the pid_logger worker responsible for querying the CAN bus.

Once you save the PID Logger, you will see it appear in the Loggers page. Once the settings have been synchronized to your device, your device will start sending PID requests on the CAN bus using the provided parameters and you should start receiving data.

If for some reason, you aren't getting any data back from the logger, you can take a look at the log files for some clues about what's going wrong. Take a look here for more information on how to view those logs.

You can also take a look at the obd_manager workers(Advanced > Services > obd_manager > Workers). There, you can notice that a new worker was created: pid_logger_10sec. If you view that worker you'll see that the parameters setup for the PID are also available there. We discourage you to make changes directly on the worker, as the worker is auto-generated based on what parameters are provided to the PID and the PID Logger. Instead, make the necessary changes on the PID and PID Logger.

In this guide we talked more in-depth about PIDs and PID Loggers. We setup a custom PID that was then used to create a PID Logger and got a very small insight into the automated processes that exist in the AutoPi ecosystem.

If you need some help with setting a logger up, feel free to reach out to us by writing us a mail to support@autopi.io. We also are very happy to receive any feedback, so don't hesitate to let us know your thoughts.